Skip to content
What's New: See our newly adopted Common House Design in Building Plans
Forming a Cohousing Community During a Pandemic
Can a Cohousing Project feed itself?
Why Join A Forming Community?

More than just a home.
a community for life.

Sunnyside Village is a cohousing community with a strong focus on our organic garden. Our intent is to produce some of what we eat on the site in our very large organic community garden, orchard and berry patch or from nearby farms. We will live in 25 to 30 small (800-1200 sf) cottages and share ownership in a large (3000 sf) Common House for community activities and some shared meals. Members own their home and also the lot it is built on. This means the home will appreciate like a home in any other neighborhood (unlike a condominium).

A Less Stressful Way of Life

Ten minutes to Everett has:

Lake Stevens, 7 minutes away with access to the lake for swimming in the summer and boating or kayaking all year. Many amazing parks open to the public at Lundeen Park, North Cove Park, Frontier Heights Park, Cavalero Skate park and access to Centennial Trail.

Nearby, the city of Snohomish has an adorable mainstreet of antique shops, boutiques, bakeries and restaurants.

add to my calendar

Find out more at our (no obligation) Introductory Zoom meeting:

Click here to reserve your spot. Last minute joiners are OK, too!

Where People are everything

Meet the most important part of our community, the people. 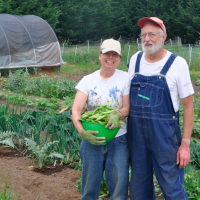 Jennie and Dean are our founders.  Jennie is a semi-retired Family Therapist and Dean is a retired scientist.  They bring a value of deep interest in producing good food for the community, working in the garden together and sharing food.

They are long time members of the local Unitarian Universalist church, which is 3.5 miles away.

Environmental issues are of primary importance to Dean and Jennie and they were founding members of 350 Everett, a local environmental action group.

Jennie: “For me, cohousing is an antidote to loneliness and isolation. It’s a diverse group of supportive neighbors and friends who like helping each other, spending time, working and playing together.”

Dean: “I want to live in cohousing because I appreciate the value of community in my life. Having people around to chat over a cup of coffee, people who will help me, and people I can lend a hand to, young and old.” 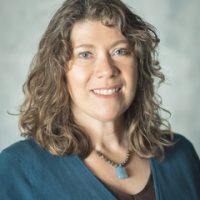 “What first drew me to Sunnyside, other than it being a cohousing community, is the emphasis on gardening and maintaining open green spaces. Now that I’ve been part of the community for some time I can say an additional draw is relationships with the community members who are are warm-hearted, interesting, and fun to engage with.”

Mary grew up on a farm in Oregon where her family grew and preserved most of their own food. That early life experience is a treasured part of her heritage. And the community aspect of cohousing has been a long-standing dream of hers.

So, no surprise that a major element that attracted her to Sunnyside Village Cohousing is the community garden, orchard, and emphasis on growing and preserving food. She enjoys hiking, camping, gardening, cooking, learning, and sharing a good meal with good friends. 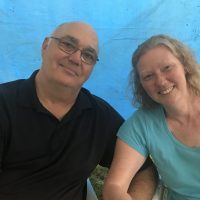 Sherie and Joe own and operate Petite Sweet bakery in Everett, WA.  Sherie has a background in interior design and is an avid gardener. She is at the site nearly every Saturday afternoon, working on the garden or the orchard.  Joe is a history buff. He is a great cook.  We’re all looking forward to his soups. 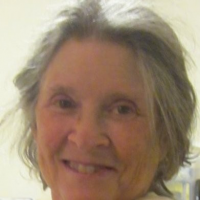 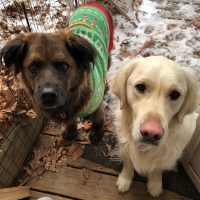 Wokie borrowed her name from her dog, Wookie. There were too many other Sara/hs in exercise classes and writing workshops. Wookie has been most generous and understanding.

Back when Wokie was a sweet young thing, her father chastised her for wanting to spray the family elm trees with DDT to kill the beetles that carry Dutch elm disease.  She cried about the dying elms, but gradually morphed into an environmentalist. She had chickens, most of whom turned out to be roosters, and a vegetable garden.

At that point her family, then in an unincorporated township without city water or the prospect of a well, depended on rain water collected in a cistern, which taught everyone very serious water conservation.

This served her well years later when she crossed the Sahara twice in an ordinary suburban Toyota minivan fending off predatory males and deadly poisonous snakes.

She’s spent most of her adult life in shared group housing, collecting hundreds of housemate experiences, most quite positive, though the negative ones make for better stories.
She’s hoping that the seriousness with which her dogs, Wookie and Kookaburra, protect their present back yard against marauding foxes, coyotes, coons, and especially deer will make them an appealing asset to Sunnyside and its gardeners. 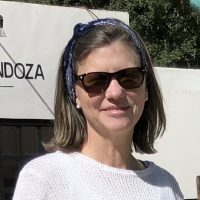 Colleen has long been interested in intentional community and is delighted to actually know and spend time with her neighbors. She embraces the values of Sunnyside Village Cohousing and is thrilled to find a cohousing community in close proximity to her kids and grandkids.
Colleen enjoys spending time with friends and family and working collaboratively in community. Outdoor activities include hiking, biking, gardening and exploring. Indoor pursuits include reading and writing, sewing, knitting, weaving and design.
She finds cohousing the perfect antidote to the isolation that is so common to today’s city dwellers and, as an introvert, loves having her own space while being part of an active community. 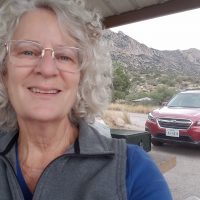 Miriam grew up in Iowa but has lived from coast to coast and border to border. She is a retired educator and has worked in nature centers as well as public schools. Her interests include hiking, camping, reading, and cooking. She is already keeping an eye out for recipes that can be scaled up for community meals!

“I am choosing cohousing because I want to live in a community where I can make connections and contributions. I want to be able to borrow a cup of sugar or bring chicken soup to a neighbor.

Patrick is an engineer in the electronics industry with a longtime interest in cohousing. He currently lives in Everett, where he volunteers for several organizations involved in historic preservation and downtown revitalization. As a hobby he enjoys renovating his historic home. 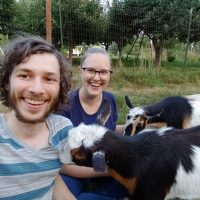 Both Troy and Kirstin are active members of the Democratic Socialists of America and of The Episcopal Church. Kirstin works as a freelance editor and prefers editing romance novels. Troy works in IT and previously worked as a sound designer for video games. The two of them currently live on a small farm that includes orchard trees, sheep, chickens, and two cute Nigerian dwarf goats. 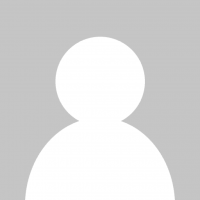 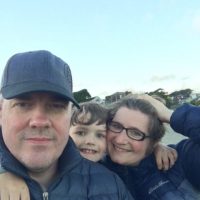 Becca, Joshua, and their son

Cohousing At Its Best

Each single family home has traditional amenities, including a private kitchen. Residents participate in the design, operation, and maintenance of our neighborhood. Residents share common facilities and good connections with neighbors. All in all, cohousing stands as an innovative and sustainable answer to many of today’s environmental and social problems. Welcome home!

These cottage and Common House designs are very tentative. We will meet as a group with our architect in early 2021 to finalize the layout and the building designs. 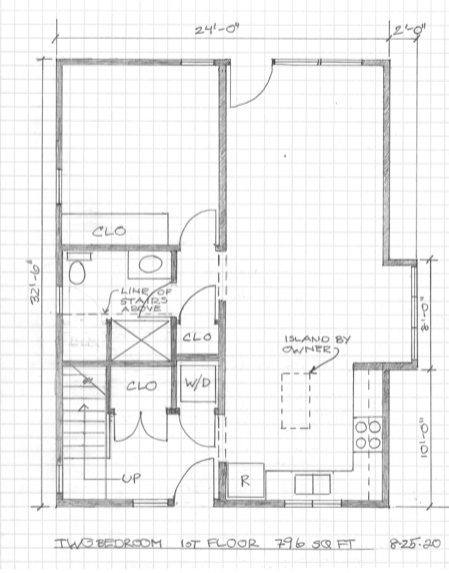 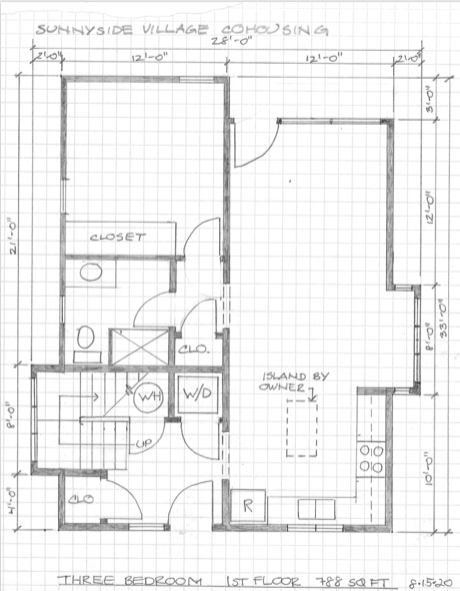 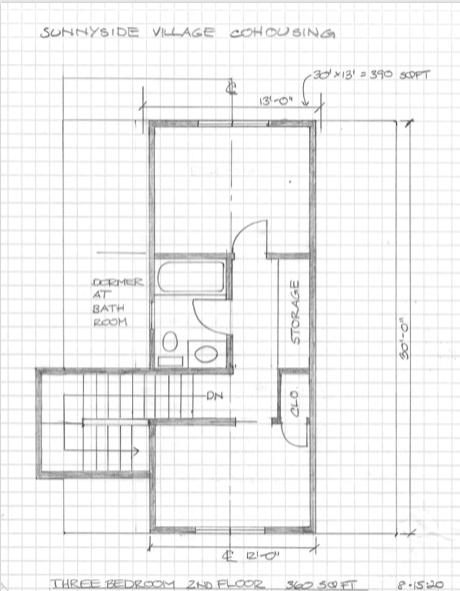 FInd out below how to learn more about Sunnyside

Explorers have the ability to attend and participate in meetings and discussions, but not vote. Your household may be Explorers for two months. If you wish to continue, then we request that you become Equity Members.

Explorers have the ability to attend and participate in meetings and discussions, but not vote. Your household may be Explorers for two months. If you wish to continue, then we request that you become Equity Members.

This includes a one-time non-refundable membership fee of $500 per household. The remaining $1,500 is a loan to the LLC and is applied to the down payment on your home.

Within 90 days you will invest an additional $10,000 into a loan to the LLC. There will be periodic additional Required Capital Contributions from Equity Members for the construction costs of our project. These payments pay for the design and the development of the property such as roads and utilities. If you are not able to contribute $10,000 within 90 days, a payment plan may be able to be worked out. Contact the Membership Circle.